Alan Greenspan’s The Age of Turbulence is a three part book. First, he recounts his intellectual journey as a consultant, advisor, and chairman of the Fed. Then, Greenspan lays out a framework for understanding the global economy. The book closes with speculations on global trends. Forewarning: I did not get to the third part. 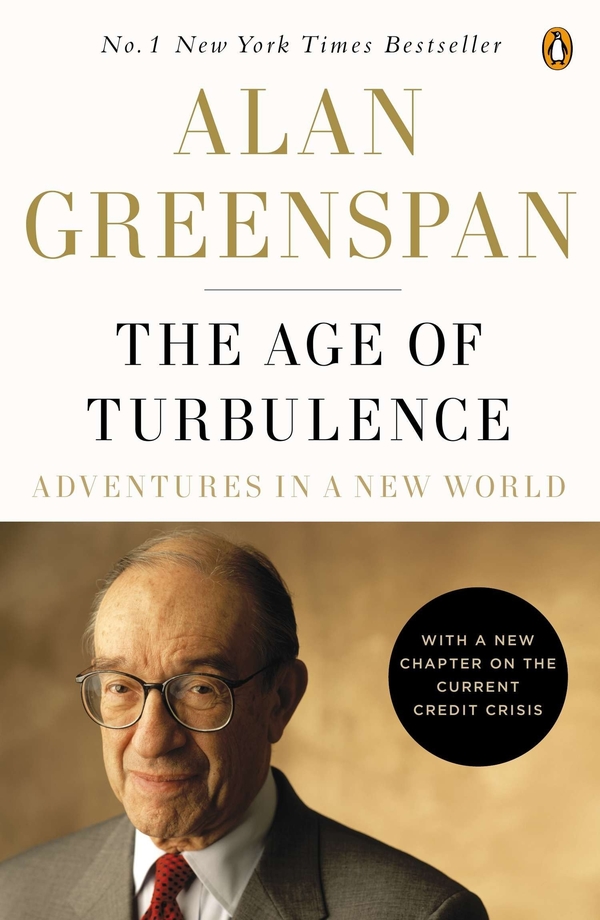 I took away the following key ideas:

The books provides a detailed autobiography and clear vision of the world. I learned quite a bit about the global economy and gained appreciation for the Austrian school of economics. Occasionally, the biography felt a bit like a court recounting. Greenspan would adopt a defensive tone whenever he discussed mistakes, often spending way too long justifying his reasoning and contextualizing his actions.

The rest of the sections were less exciting. The content got dry, the organization was poor, and the writing… well, let’s just say that I could tell he worked in government. Amidst a confusing chapter about accounts and deficits, I decided that—following Ali Abdaal’s advice—I would allow myself to put down this book. Sorry, Shariar.

Now, since there’s no way in hell I was going to serve as a stenographer to his dry, ramble-y testimony, I took notes on part 2. The biography does help explain how he developed his worldview, but it is inessential to his ideas.

The Universals of Economic Growth

There are three factors that influence growth:

Economists disagree on their relative importance, but Greenspan thinks property rights (2) are the most important. Communist China and the Soviet Union found that privately owned farms were far more productive than state-controlled land. Moreover, for property rights to truly propel markets, norms must be deeply embedded in both legal and cultural institutions. That’s why transition from socialism is hard—it requires changing the way people think.

Capitalism is not intrinsically tied to democracy. India is the largest democracy in the world but overregulates businesses. Simultaneously, Hong Kong and Singapore have a highly privatized economies but little democratic scrutiny. Nevertheless, democracies are better at enforcing property rights because they provide legal avenues to enforce them. No famine has ever occurred in a democracy with a free press.

One way to alleviate global poverty would be to grant private parcels of public land. But corrupt authorities have opposite incentives, since for governments like the CCP, control over land is a crucial way to govern their populations. Even the U.S. practices eminent domain.

Property rights are an important contributor to resilience. A competitive marketplace allows an economy to recover from shocks like 911. So does social capital. In any free society, people undergo voluntary transactions, requiring reputation and trust.

Surprisingly, natural resources are not a key growth factor. Most analysts think jackpots of natural resources tend to reduce standards of living through Dutch disease. In essence, foreign demand for an export drives up the exchange value of the country’s currency, making other exports less competitive.

Since 1970, economic liberalization has driven increases in per capita income, especially in the world’s poorest regions. East Asia succeeded, Latin America did fine, but many countries in sub-Saharan Africa have become poorer since then.

Adam Smith wrote the Wealth of Nations with the simple idea that collective self-interest produces public good. Although he lacked the datasets at the time, modern research bears out his ideas. After industrialization in Europe, followers of Fabian socialism fought for strong regulations. It wasn’t until after World War 2 that Adam Smith regained his status as a luminary thinker.

The Modes of Capitalism

Happiness is a relative matter. Students prefer 50K a year if their friends earn half as much over 100k if their friends earn twice as much. In practice, families spend relative to nation’s average income, reflecting “conspicuous consumption”, the desire to have what our neighbors have. American wealth, though, trades off with lack of stress, as Americans lose their jobs more frequently than peers in China and Japan.

Culture plays a big role. Religion, for example, is generally associated with anti-materialism. Protectionism also plays a role, as it often morphs into corruption, where heavy subsidies distort the market. The Index of Economic Freedom finds that measures of economic liberalization correlates with per capita income.

Cultures can evolve. The U.S. swung from post civil war laissez faire capitalism to FDR’s new deal and back to market competition soon after. After world war ii, European economies favored larger safety nets, they they each eventually fell back to markets, with key examples in Britain and France.

The Choices that Await China

After Mao’s reign, Deng intended to guide China from a socialist, agrarian economy to a competitive global force. After initial success with privatizing farms, the CCP began privatizing other industries as well, giving them the oxymoronic label, “market socialism.” Now, China has granted people the right to buy and own homes, although of course, judicial corruption inhibits full property rights.

Recently, China has been rapidly privatizing. China has entered the global banking system and absorbed western cultures. All of this highlights a central tension: the more they deregulate markets, the less control the party has. Upcoming challenges for the party include reactionaries, rural populations, bloated socialized sectors, and corruption.

There were two pathways for reform. First, the government had set the exchange rate for the RMB too high, and a black market had taken over. After lifting the fixed rate, exports flourished. While China currently serves mostly as a middleman that assembles components, that could change. The second shift was the move from rural to urban life. People were formerly forced to live in the same place they were born. That unrest creates problems.

The Tigers and the Elephant

China’s growth modeled that of the Asian Tigers—Hong Kong, Taiwan, Korea, and Singapore. After devastating wars, their economies were crushed. The governments of the Tigers initially favored central planning and autocratic leaders. After some disappointing initial progress, they reduced barriers to free trade and thrived, leveraging lower wages. Standards of living rose dramatically.

By the 1980s, the Tigers were trading with one another, driving specialization in goods like semiconductors, and computers. The growth wasn’t at he expense of other countries either: global exports and imports have grown dramatically, with opportunities for developed countries to export intellectual services. Of course, although real incomes have grown for the United States, the associated job loss in areas like manufacturing deals real harm to workers.

Progress will continue. Various fiscal reforms make a future crisis unlikely. Technology will continue to drive growth, although it will be slower than in the last six decades. One impediment is the rising costs of production as privatization drives foreign investment.

India is an interesting case study. Rather than developing a labor intensive manufacturing sector, India has been focusing on high-tech global service. Their real GDP growth has increased dramatically, but per capita GDP is still much smaller. The reason is an extensive regulatory state called the “license raj” that drags down the economy.

Some reforms have been passed since the 90s, but much remains to be done. The IT industry employs just 1 percent of workers. What India needs are large factories, but because of cost of labor laws, factories are usually restricted to less than ten workers. Meanwhile, agriculture is a mess, as regulation has depressed farm productivity, leaving rural Indians in a decrepit state. So long as license raj is in place, FDI is deterred.

Upon entering office, Putin seemed excited about tax reform. deregulation, and privatization. But soon after, that momentum ran out, unsurprising given his deep, collectivist roots. Putin has strong institutional incentives to maintain that control, driven in part by a fear of economic oligarchs.

Putin’s strategy has been to leverage natural gas exports. Despite accusations of international bullying, the state-run energy sector has been successful, attributable in part to surges in gas prices. To prepare against Dutch Disease, they plan to keep a stabilization fund of foreign currencies funded by excess oil revenues.

Rule of law is still nascent. Putin selectively enforces the law to grab oil assets. The danger is that, even if property rights are written in the law, the necessary culture will not develop.

The primary cause of Latin America’s crises and coups was economic populism. Economic populism is a response by impoverished populace to the an oppressive elite. It practice, it may trample property right and disregard long term consequences. The ubiquity of economic populism is no surprise—these countries face high inequality due to a history of European colonization.

The United States is not the cause of their economic woes. Although Latin politicians demonize America, our post-war involvement in Latin America was probably a net good. The true problem is economic populism.

The general sentiment is towards redistribution. But, misguided ideas and poor planning have caused repeated failures in Brazil, Argentina, Chile and Peru. Often, politicians promise too much with no plan to pay, resulting in inflation. When the populists are successful, the markets play a key role. Venezuela is a good example: Chavez took over successful private oil companies and tanked production. Although the country has been buoyed by high oil prices, it is vulnerable to disaster should prices drop.

A generation of Latin technocrats may steer these countries in new direction. Brazil was able to leverage planning to curb inflation. On the other hand, Argentina’s economy collapsed its effort to peg the peso to the dollar failed.

In the U.S., particular policies may be populist, but the government remains a liberal democracy. Liberal democracy is populism with the recognition of individual rights. Economic populism lacks the latter.