An abbreviated version of this article is published on the Berkeley Economic Review as Partisanship and COVID-19 Response.

In November of last year, I was assigned a cool final project in statistics class: take a COVID-19 dataset and dig around for anything interesting. The dataset included state-level COVID-19 cases, deaths, and a handful of related variables (like ICU availability, lockdown status, age). I snuck in an extra variable: the results of the 2020 election.

I was inspired to look at partisanship by previous studies that I’d read. One of them found that states with Democratic governments had better pandemic responses than those with Republican governments, even after controlling for other variables. A later study confirmed that while Republican-led states fared better in the beginning, Democrat-led states have had lower case rates since June 8th.

Part of the explanation lies in individual behavior. For example, Fox News consumption turns out to be correlated with less physical distancing. More strikingly, researchers have shown that partisanship is the strongest predictor of mobility—how likely someone is to travel. These differences in distancing have, in turn, been associated in increased fatality rates.

None of these studies, however, took advantage of the 2020 election results. These are interesting data points. Time reported that—unsettlingly—the counties with the most COVID cases were also the biggest fans of President Trump. Election results offer more information than a binary red/blue label on state governments, measuring the magnitude of political support, while also distinguishing Republicanism from Trumpism (otherwise, we’d have put my home state of Maryland in the same basket as previous home, North Dakota).

I set out to examine the relationship between election results and COVID outcomes.

For the class project, I chose to simply correlate and plot partisanship against COVID cases and deaths. The dataset only included COVID outcomes from June and October, so I used those numbers. I pulled election results from here and subtracted Trump’s proportion of votes from that of Biden’s (for Maryland—which went 65.8% to 32.4% for Biden—this would be 0.334). I dubbed this measure of partisanship the “Biden margin.”

Below, I plotted case rate against the death rate (which means being in the top-right is very bad) and colored the points according to Biden’s margin of victory. The plots speak for themselves: in June, blue states suffered from higher death rates, and red states tended to have more cases; by October, the data points aligned, and the states with both the most deaths and the cases were red. 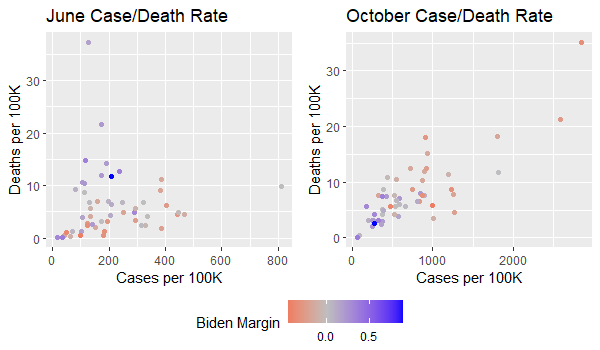 So what changed between June and October? I plotted the difference in cases and deaths between June and October against Biden’s margin. Here, partisanship is significantly correlated with both the increase in cases (r=0.483) and the increase in deaths (-0.589). All of this suggests that, from June to October, partisanship significantly influenced state success in containing COVID-19. 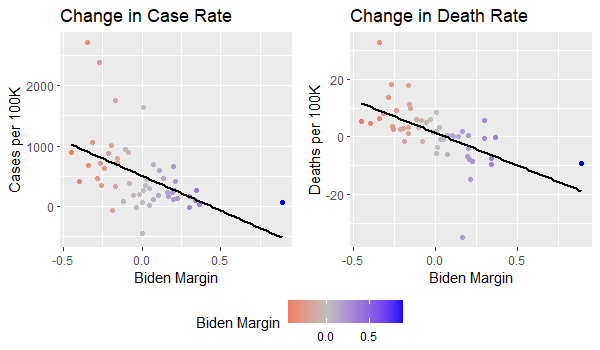 But these data faced some important limitations. First, state-level data is highly aggregated, which exaggerates county-level effects and makes it difficult to establish significance. Second, the cases and deaths data were limited to June and October totals, which is a problem if we want to examine more recent trends or specific days. I had a good visual for a class project, but not a thorough analysis.

I decided to build my own, county-level dataset. To test the strength of the partisanship-COVID relationship, I tried to control for significant predictors of COVID cases, such as race, density, and geographic location. To test potential mechanisms for the relationship, I also collected data on mask use and mobility. I compiled,[^2] with assistance from other data aggregators, the following data sources:

After merging the datasets, I had complete features for 3,111 instances, which spans nearly every county. Below are summary statistics for each feature, with the COVID cases/deaths omitted for brevity.

I began by validating the state-level analysis and looking for new trends. I isolated the COVID cases and deaths over April, June, October, and December, which roughly represent the different stages of the pandemic. Based on previous literature, we would expect June to be the “turning point” where blue states began to outperform red states.

I calculated a new “Biden Margin” and plotted them against cases below. The trend is generally validated—while blue states had more cases in April (r=0.22), that trend began in reverse in June (r=0.17), with an stronger, opposite relationship in December (r=-0.22). 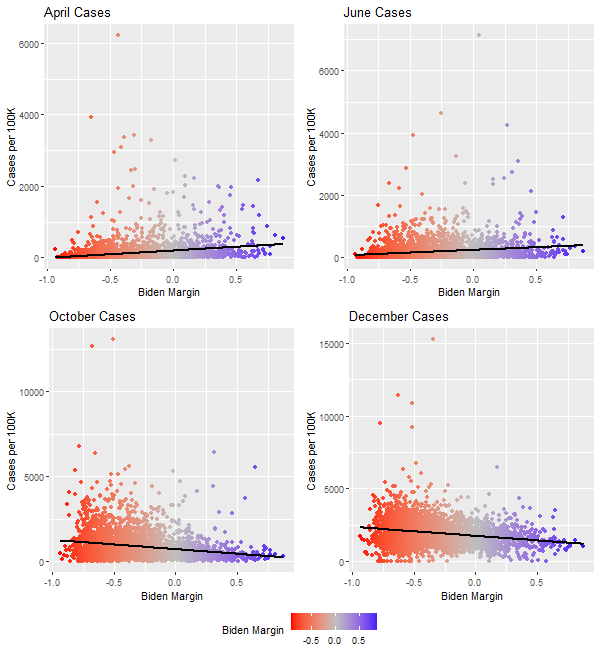 A similar story holds for the death rates, which are plotted below (April is omitted due to lack of data). From June (r=0.20) to October (r=-0.12) to December (r=-0.23), the relationship between partisanship and COVID deaths reversed. By December, every single county with more than 150 deaths per 100,000 was a red state. The differences are stark. 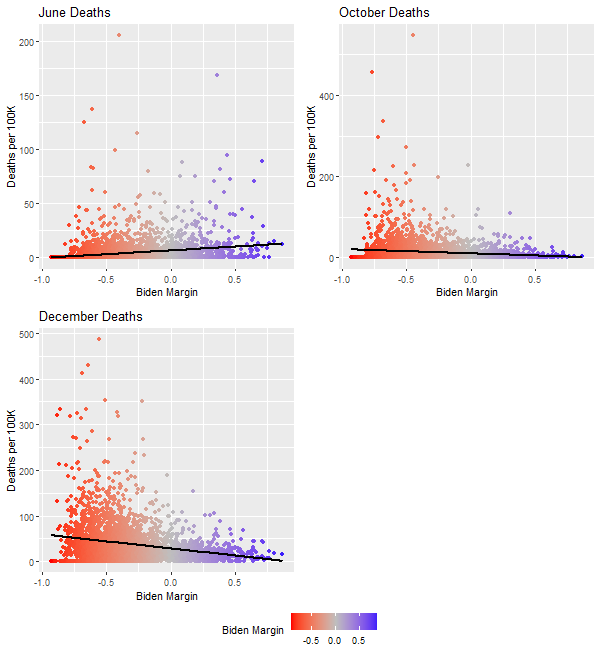 Two further observations are in order:

Next, I looked at the impact of mobility and mask use on cases in December. Mobility is measured by the total trips per person in November. Mask use is measured by the percent of people who reported wearing masks “all the time” on a survey.

As one might expect, mask use has a significant negative correlation with (r=-0.24). More importantly, mask use seems to be more correlated with Biden’s margin, which suggests that it could be a mediator. On the other hand, mobility is (unintuitively) negatively correlated with cases, with the most mobile counties tending to be red. 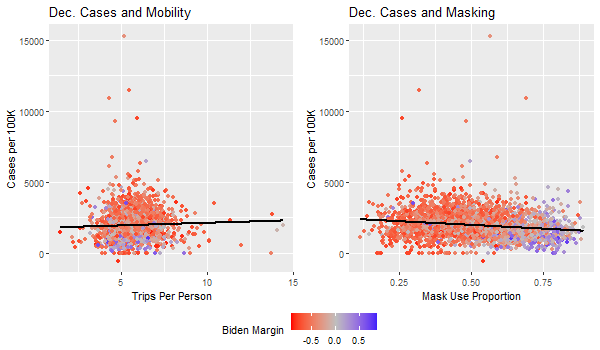 I used the following variables in regression:

The motivations behind these latter four models are similar. Model 5 will predict death rates from population features. Model 6 and 7 will assess the impact of county and state partisanship. Model 8 will control for social distancing measures and ICU availability.

The regression results for case rates are below.

The regression results for death rates are below.

Here are eight insights we can draw from our eight models:

The article has examined the relationship between partisanship, COVID outcomes, and related explanatory variables. The results largely corroborate existing research on standard explanatory factors and highlight the difficult of explaining county-by-county variance.

The analysis was subject to several limitations:

There are several avenues for future research:

Thanks to the those who maintained the datasets that this analysis used. The data sources and compiler are available in my repo and can be used to compile updated statistics.